If I were going to #lumebattle, this would be my best option. Sure, Seiko’s and many others are known for their long lasting, ultra bright lume. In fact, if somebody asked your opinion, I’m sure Casio would never cross your mind. This on the other hand, might change all that…

The ProTrek is a name I’ve known for a long time. I’ve had the PAW1500T (Titanium) for the last 10 years. The specs read like a Bond movie, and are easily found online so I won’t waste time and list them all here.

Besides the obvious Ani-digi Update to this ProTrek Line-Up, There are still a couple other improvements that should be obvious by now. Is it the Analog screw down crown, that controls all the time functions digitally? Or that now, instead of an LCD readout of direction the second hand whips into action to show the way? The functional Sub-dial? Or maybe it’s… the LUME?!

Yes the features are long, but it was obviously the lume I’m trying to highlight here. Not only have they managed to have the bands GITD, but the attention and detail on the watch face blew me away. Lets start there.

At first glance, you see an aviation influence in this piece for sure. A nice triangle at the top and a big square at the 6 is a nice touch. Underneath that square, is a UV light.

The lume is far improved from any other Casio I’ve owned, (I suppose the new line of G-Shocks is probably the same). Not only does it last ALL night, but they even went so far as to lume the tip of the seconds hand. It’s not filled with lume like a conventional second hand, the tip is actually lume. Because it’s Ani-Digi they had to add in a way to light the screen. The button is cleanly integrated and almost un-noticeable. When pressed the screen lights up in modern fasion and with one push, all three hands instantly burst into lume. If pressed a few times, it’s even enough to charge them for a while. Thick, angled black hour markers are actually clear and burst into Green, everything with that beautiful UV hue. The only thing not lumed is the Sub hand which bummer, would have been easy to do.

I picked this watch out of several because of the clean GMT Aviator style face and the smaller band. For once, I actually wanted a nice silicone strap. Casio’s can live forever and this would be great for every outdoor activity. Really though, I loved the look of the two-tone and the fact it glows. (I mean.. Come on!) I didn’t know what to expect until my first night with it. Nuclear doesn’t even quite explain it. When hit with a flashlight, or good natural light from outside you can probably see it from space. At the very least, it lights up a small room. Mind you, I took this shot early yesterday evening (4:28PM is my timestamp) and it was still glowing at 5:30am today the 6th watch face included.

There’s not much else to be said. My phone doesn’t do it justice. If you’re in the market for this type of watch, I would skip the G-shocks and go straight here. The best price is Amazon, and you can find it Here .

I’ve always liked this Xbox photo but never found the right time to post it. I spent some time back home in Wisconsin this year, and bought this NEON controller so I could slay Zombies with my brother. Obviously I had to match it to the watch and take a pic. 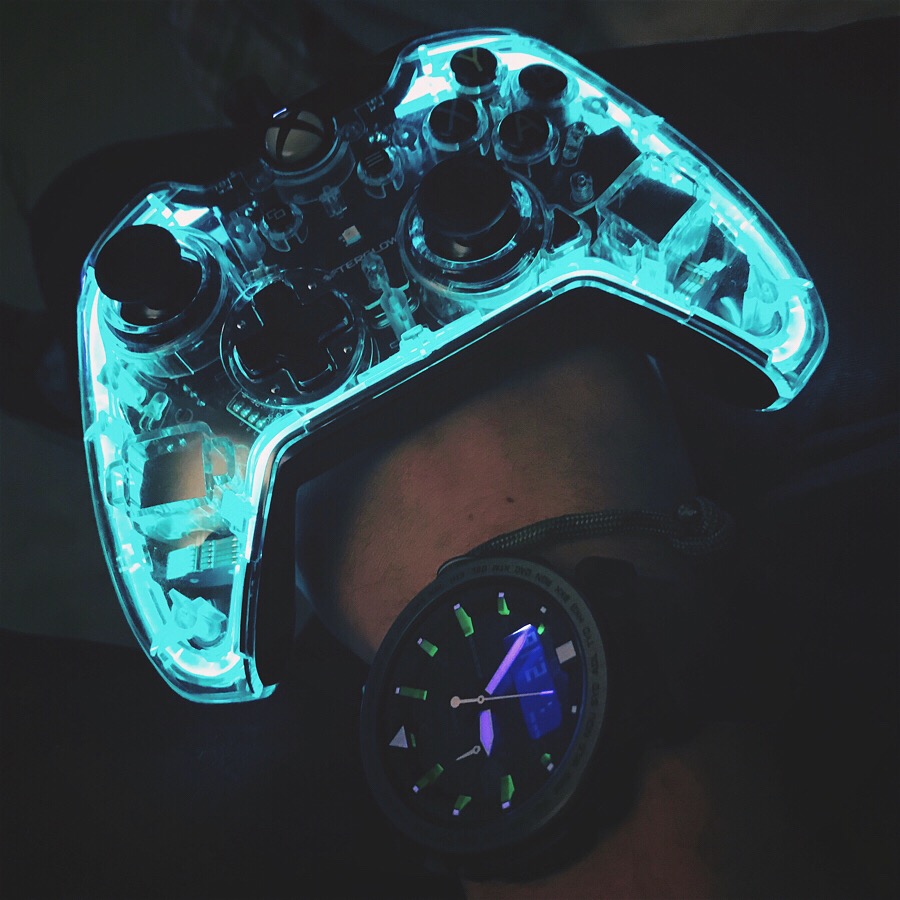 This photo was taken at the same time, but I didnt really “know” myself then. I was still experimenting with my Social presence. Art drives my life but I wanted my Instagram to be something more specific and refined. I’m working hard to mesh my passions together, while keeping things inspiring yet on point. It’s fun to look back through my timeline and see how things evolve.

This last pic didn’t get posted but I have thousands like it. Art. An Image that was something, that became something new. Refined or distilled in a different way than it started. Thats part of what this blog will be. An outlet for the other side of Instagram. The Hyde to my Dr. Jekyll.

Lets be honest, we’re not shooting mountains, or fields of amber. Its a lot of hard work to make watch pictures interesting. Yes, a $10,000 Rolex is cool.. It’s amazing! But, pictures are more than what’s in them (or whats on your arm). It’s the story they tell. It’s what they start as, and what they can become. Thats my philosophy.